Our Patron and Founders 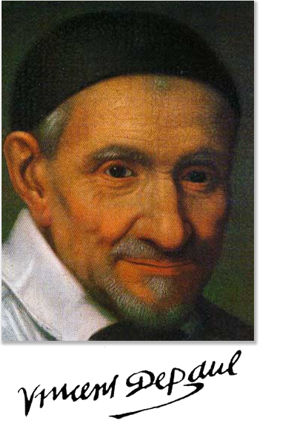 St. Vincent de Paul was born on April 24, 1581, to an impoverished French peasant family.  At 15 his family was able to send him to a seminary by selling the family’s oxen.  St. Vincent de Paul was passionate about providing both relief and hope for the suffering.  In addition to his work with the poor, he founded religious orders, established hospitals, ministered to convicts, and helped reform the clergy.  He died September 27, 1660, and was canonized a saint by Pope Clement XII on June 16, 1737
Quote: “We should strive to keep our hearts open to the sufferings and wretchedness of other people and pray continually that God may grant us that spirit of compassion which is truly the spirit of God.”

More Information about St. Vincent de Paul, his life, and his works of charity can be found here:
https://www.catholic.org/saints/saint.php?saint_id=326
https://www.britannica.com/biography/Saint-Vincent-de-Paul
http://www.newadvent.org/cathen/15434c.htm
https://en.wikipedia.org/wiki/Vincent_de_Paul​ 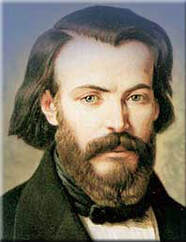 Blessed Frederic Ozanam was born on April 23, 1813, into a large family of fourteen children; he was one of only three siblings that lived into adulthood.  Frederic Ozanam, on April 23, 1833, was challenged by a fellow student at Saint-Simonians at the University of Paris to practice what he preached.  He helped form the Conference of Charity and they held their charter meeting in May of that same year.  By 1835, the society had its own official rule and a new official name: The Society of Saint Vincent de Paul. He died at the age of forty on September 8, 1853, and was beatified by Pope John Paul II on August 22, 1997.

Quote: “Let us learn, first of all, to defend our belief without hating our adversaries, to appreciate those who do not think as we do, to recognize that there are Christians in every camp, and that God can be served now as always! Let us complain less of our times and more of ourselves. Let us not be discouraged, let us be better.”
​
More Information about Bl. Frederic Ozanam, his life, and his works of charity can be found here:
https://www.vatican.va/jubilee_2000/magazine/documents/ju_mag_01091997_p-16_en.html
http://www.newadvent.org/cathen/11378a.htm
https://www.britannica.com/biography/Antoine-Frederic-Ozanam
https://en.wikipedia.org/wiki/Fr%C3%A9d%C3%A9ric_Ozanam 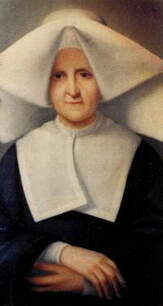 Blessed Rosalie Rendu was born Jeanne Marie Rendu on September 9, 1786.  She was only three when her family home became a refuge for priests loyal to Rome during the French Revolution.  Jeanne Marie took the name Rosalie, at the age of 16 when she entered the congregation at the motherhouse of the Daughters of Charity of St. Vincent de Paul in Paris, France.  For 54 years, Bl. Rosalie Rendu worked with the sick and poor, taught catechism, started a free clinic, pharmacy, school, orphanage, a child-care center, youth clubs and even taught girls to read.  She died on February 7, 1856, and was beatified on November 9, 2003, by Pope John Paul II.

Quote: “But be kind and love, for love is your first gift to the poor.  They will appreciate your kindness and your love more than all else you bring them.”

More Information about Bl. Rosalie Rendu, her life, and her works of charity can be found here:
http://www.vatican.va/news_services/liturgy/saints/ns_lit_doc_20031109_rendu_en.html
https://catholicsaints.info/blessed-rosalie-rendu/
https://www.catholic.org/saints/saint.php?saint_id=5708
https://en.wikipedia.org/wiki/Rosalie_Rendu 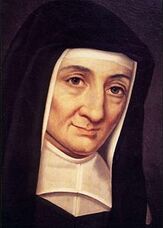 St. Louise de Marillac was born out of wedlock on August 12, 1591, and raised by her father, Lord of Ferrires, Louis de Marillac.  In 1625, after the death of her husband, St. Vincent de Paul became her spiritual adviser, and she devoted the rest of her life to working with him, founding Daughters of Charity of Saint Vincent de Paul. She established her sisters in hospitals, orphanages, and other institutions. She died at aged 68 on March 15, 1660, was canonized by Pope Pius XI in 1934 and in 1960, she was declared Patroness of Social Workers by Pope John XXIII.
Quote: “Encourage one another, and may your mutual good example speak louder than any words can.”

More Information about St. Louise de Marillac, her life, and her works of charity can be found here:
https://www.catholic.org/saints/saint.php?saint_id=196
https://www.britannica.com/biography/Saint-Louise-de-Marillac
http://saintsresource.com/louise-de-marillac
https://en.wikipedia.org/wiki/Louise_de_Marillac